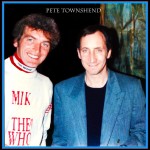 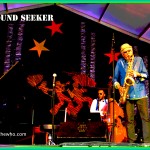 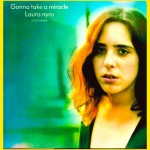 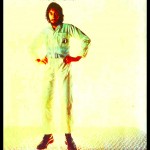 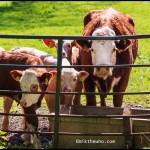 Winter is a time for comfort and the pure invincible warmth of music to bring a glow and perseverance to your heart. 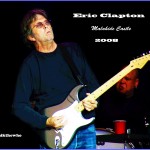 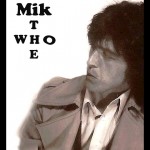 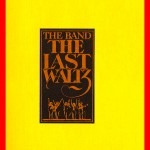 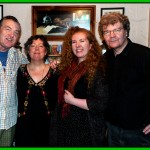 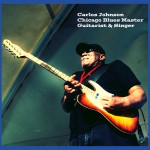 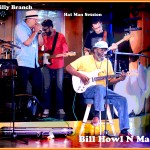 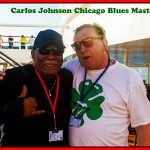 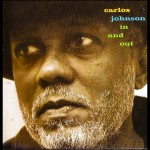 Carlos Johnson In And Out 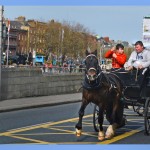 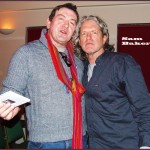 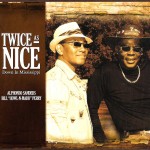 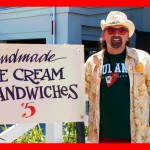 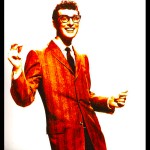 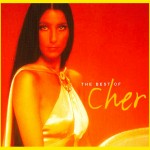 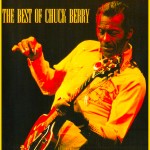 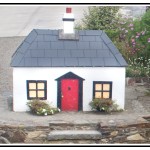 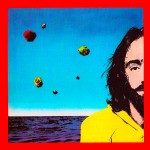 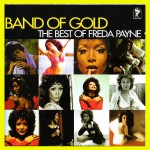 Real live Chicago Blues performances have been thin on the ground in recent years so the arrival of consummate bluesman Carlos Johnson with his own band was eagerly awaited in Dublin’s new live music venue, the Bleu Note on Capel St this weekend.

Local support band for the Friday night show The Blue Notes kicked off the first half of the night with a powerful set of classic cover versions and crowd pleasers, wishing BB King well from his current ill health with an impressive up tempo version of The Thrill Is Gone followed by another classic Just A Little Bit.

The Blue Notes with front man Steve Mc Loughlin grooving and twisting away like Chubby Checker on stage led the band through material from Sonny Boy Williamson, Van Morrison, the late soulster James Brown, Joe Cocker with guitarist Phil Bolger in fine form on ZZ Tops Fool For Your Stockings and an exciting key change on Further On Up The Road.

“Now I’m telling everybody
It seems too good to be true
Sweet things can always get sweeter
I know mine did, how about you?
Yes, its alright
I said, yes it is, that’s alright
I may not want to admit it
I’m just a fool for your stockings I believe”

The Blue Notes make a glorious joyous, raucous racket and opened up the nights proceedings with a set crammed full of classic covers with the Guitar, Bass, Drums, Saxophone, Blues Harp and Vocals giving a turbo charged facelift to the classic blues rock and boogie material.

Downstairs in the basement of this popular new music venue on Dublin’s Capel St, the Friday evening crowd was mellowing out nicely to the Liza Hingerty Quartet who was sculpting her thimbleful gentle voice to maximum effect over the sleek addictive proficient arrangements and beamed me back to an intimate Julie London vibe in a 50’s martini lounge resplendent in her radiant azure blue silk cocktail dress as clear as unclouded sky.

The Bleu Note has done a great job in recent months for live music in Dublin and the added value is a management team who genuinely care about promoting quality music attractions in comfortable and stylish surroundings and are currently working on an exciting presentation for Valentine’s Night featuring Liza and six equally talented female jazz vocalists which will surely be a winner all the way in the candle lit ambiance of the Bleu Note on a night when there is so much love in the air.

I must confess I am also very partial to the delights of the Bleu Notes imported beers in moderation of course, particularly the clean rich flavours of the eastern European brews with their mysterious soft pleasant aftertastes.

“Beauty lies in the hands of the beerholder”

Carlos Johnson’s Dublin performance of his signature brand of top blues, r&b, jazzy blues and funky soul seen him in the company of a molten hot three piece band comprising Tim Gant Piano, Joewaun Scott Bass and Melvin Carlisle aka Pookie Styx on the Drums who got the contemporary and traditional values in his music exactly right.

There was an enlightening feel and groove between the musicians on the stage, the importance of the interaction was evident from the start, the nods, smiles and eye contact directing the dynamics on stage with the whole crowd tapping their toes and tying in with the amazing high hat and snare work and throbbing bass rhythm section.

When Carlos puts his foot on the accelerator ascending his chilling south paw arpeggiated chord work to a climax, he delivers screaming blues solos shaped with the most incredible searing perfectly controlled, intonated high register bends wailing on the right side of the feedback threshold.Thankfully I was there to witness this essential performance of live music at it’s finest and reminded me of the old Irish proverb:

At one point Carlos took his hollow bodied Gibson for a stroll over to Liza Hingerty in the audience, who joined him on vocals for his version of Mississippi John Hurt’s Nobody’s Business But Mine, teasing the audience as to whether he should play hard or soft.

Anyone there truly witnessed history in the making, Carlos surrounded by his own calibre of musicians intuitively complementing his true potential in a meaty definitive master class in contemporary Chicago Blues playing and reminded me of an similar indelible memory in Whelan’s back in the early 90’s witnessing another Chicago legend Jimmy Rogers, sadly not to long before he passed away , live in Dublin with his All Stars Blues Band featuring Houndog Taylor’s drummer Ted Harvey.

Then there was another much recalled legendary performance by Luther Allison at the Monaghan Blues Festival which I unfortunately missed out on, but I did make it to his Mean Fiddler performance before he sadly had to leave us also in 1999 to go up that great stage in the sky.

Carlos Johnson in the company of top drawer Chicago musicians, this is the environment that allows the individual musical ebullience shine through and spawns new and unexpected delights and perspectives.

In a good live music performance the audience are vital participants and their response is itself essential for the performance to take off and fly and fly it did in the Bleu Note with constant back and forth exchanges unifying the exuberant sexual energy in the air as the atmosphere got rocking and the dancers boogied their way to the stage front for this real deal blues party in Dublin’s fair city.

Whatever style of music you play, if you do it convincingly then your spirituality always comes out in the music and Carlos brings it out revealing a good heart, taking a video camera and filming the audience sending a get well greeting to Chicago Bassman Sam Green who worked on his excellent In And Out CD, who is unfortunately in bad health as a result of a motorcycle accident back home.

Carlos Johnson is a modern manifestation of the trajectory of the blues guitar style incorporating the rootsy passion of tradition with the modern technical proficiency and meld of jazz, soul and funk and has proven that given a chance, good promotion and sponsorship, this kind of gig can be embraced by a diverse multigenerational audience looking for the live experience and an opportunity to participate and be united in the joy of music united as listener and musician under the same roof.

“The women all like us cause we play in this place
The men don’t like us when we knock’m to their knees
I said hey, there’s a blues band in town
We love to play the blues
We don’t mess around
Hey a Blues Man’s in your town”

Carlos Johnson was in top form in the Bleu Note and this axe slinger of considerable repute had all the dancers in the audience at the top of the class for the final encores and although the ladies had all the best bump and grind moves on view, the air guitar call and response award of the night goes to our own blues traveller Black Hat Gerry sending us all home ecstatically satisfied at almost 3am in the morning.

Carlos Johnson is an excellent example of a working musician nurturing and re-cultivating the roots of a music styles tradition with an instrumental virtuosity that is exciting, energetic, vital and dynamic and its why the audience in the Bleu Note responded with equal enthusiasm as Carlos went for a walk through the audience, in behind the bar at the back, playing non stop and jamming with his musicians on the stage with the crowd roaring on approval in the middle of this musical sandwich.

The live music experiences has always been one of the best transcendent releases we as human beings need to release the everyday tensions of life and find a life dance to restore the balance and it was a great one.

“Well it sounds so sweet
I had to take me chance
Rose out of my seat
I just had to dance
Started moving my feet
Whoa to clapping my hands
I said the joint was a rocking
Goin’ round and round
Yeah, reeling and a rocking
What a crazy sound
And they never stopped rocking
‘Til the moon went down”

Supported by an impressive set from our own local blues heroes The Business featuring Pat Farrell on some finely crafted blistering fretwork, John Quarney on Bass and Davey Gaynor on Drums playing some crowd favourites like Standing Out There in the Rain, Ain’t Superstitious, Poor Man’s Throne and Willie Dixon’s I’m Ready the atmosphere in the Bleu Note was on a high when one of Chicago’s finest blues guitarist’s Carlos Johnson arrived on stage.

The Bleu Note a very welcome new live music venue on Dublin’s Capel Street, put on three Chicago Blues nights featuring the electrifying Carlos Johnson supported by The Mary Stokes Band on Thursday, The Business on Friday, and The Conspirators on Saturday night.

Carlos Johnson is the real deal on stage a south paw playing with the heavy strings nearest the floor and a tone wailing on the right side of the feedback threshold, this thumb and finger style bluesman played scorching guitar breaks and high energy funky blues.Carlos Johnson knows exactly what he is doing on stage, drawing on his voraciously wide musical interests, with elements of funk, soul, jazz and classic Chicago blues, all bubbling away, is cooking away on the Bleu Note stage.

Born in Cook County back in 1948 Carlos started off being in awe of BB King but soon started adding other influences like Charlie Christian who pioneered the sound of single string guitar playing back in the late 1930’s and early 40’s moving on to make a living playing the blues behind Junior Well’s, Koko Taylor and Son Seals.

Playing his hollow bodied Gibson upside down with the knobs under his arm, Carlos goes for a stinging, biting tonal attack taking it for a stroll around the crowd when its really cooking. His band for these engagements were a Polish Blues Band called Blue Crow based in Castlebar and they were kept on their toes as Carlos play’s hard and fast, teasing the female audience members at every opportunity as to whether he should play hard or soft, clearly gifted in the art of the double entendre.

He mixed in classics like Jimmy Reed’s Bright Lights Big City and I’m A Man with inventive material of his own like Leaving On The Next Train and Blues Man and by the time he finally unplugged his faithful guitar the crowd was well and truly in a party mood.Carlos is especially hot on the slow soul jazz style guitar workouts with a terse and tasteful attack on the strings and like all left handed players who play the strings, strung high on top his unique approach is spellbinding to watch with the end result individual and divine.

His resulting popularity with the audience in the Bleu Note had them all in the palm of his hand in no time with all kinds of dance moves being witnessed at the front of the stage. His voice is full of funky urban tones with a wicked sense of humour repeatedly teasing the receptive audience with plenty of feedback from the equally humorous Dubs.

Carlos has earned his stripes touring internationally as far away as Japan and serves the tradition well when he demonstrates how easily he turns the blue groove into a soul party and left no one in any doubt that there was a Real Chicago Blues Man in Capel St steaming up the windows on a freezing cold November night in Dublin.